The Futsal Team of Maccabi GB has some of England’s best players. My report in the Jewish German Newspaper, Jüdische Allgemeine.

People in Golders Green, London, braise themselves against a far right demonstration!

en.: Last week I wrote a lenghty article in the Jewish German national the Juedische Allgemeine about the UK elections from a Jewish perspective. What can be said about how Miliband was portrayed, how is Cameron seen by UK Jews, and other points from a Jewish viewpoint.

A Jewish primary school in Liverpool has 70% non-Jewish children and one of Liverpool’s ambassador for human diversity.

In this report of in the German Jewish national paper Jüdische Allgemeine, I follow the arguments that allegedly the “Jewish lobby” is departing Ed Miliband.

My report about the dispute between the London Jewish Film Festival and the London Tricycle Theatre, when the later said it could no longer host the festival due to the festival receiving a small amount of sponsorship from the Israeli Embassy.

My report on a rabbi who decides to fast for one month after a fellow Jewish congregant panics seeing a Muslim in shul. 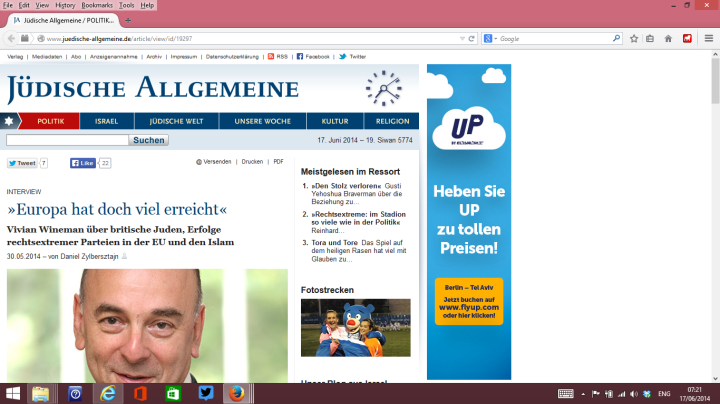 ENGLISH: Read my interview in the German Jüdische Allgemeine with Jewish Board of Deputies  (BOD) president Vivian Wineman, assessing the ultra right successes of the European elections (use google translate to get translation)

This interview was recommended by the Federal German Agency for political education, of the German Government..

In the last two weeks I published three reports on Jewish Affairs.

1.) The matter of ritual slaughter was dealt with in this article

It discusses points raised by the British Veterinary Association, and how the Muslim Council of Britain thinks the BVA has misunderstood something important. Meanwhile it decided to follow the Jewish example of setting up a national regulatory body for animal slaughter.

2.) A report by the European Union Agency for Fundamental Rights on Anti-Semitism was discussed in the British House of Commons and went beyond that to discuss hate crime in the EU in general.  I have written separately on this in German and English.

A look behind the organisation of the forthcoming biggest Jewish learning event in the world.

Use googletranslate for an English translation of the German original

ENGLISH SUMMARY
My article in Germany’s Jewish Paper documents my visit at the new JW3 Jewish cultural centre in London.
If you use googletranslate you can read it in any language.  The article is here http://www.juedische-allgemeine.de/article/view/id/17445 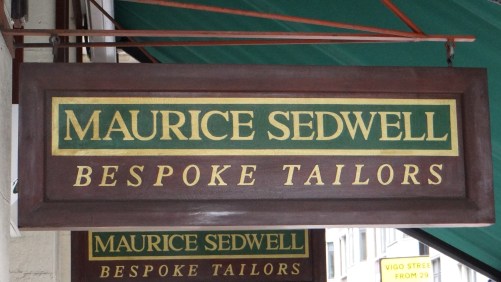 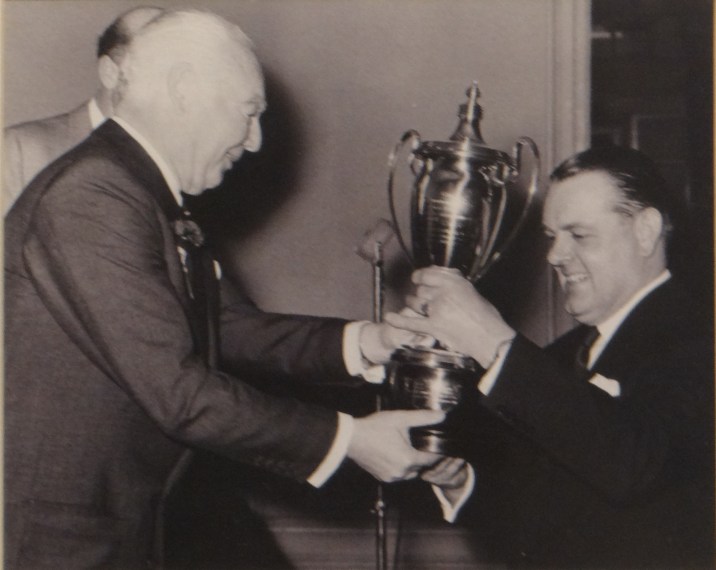 When I was asked by the Jüdische Allgemeine, the main German Jewish Weekly, to check on Yosl Tiefenbrunn, who is taking an apprentice at Maurice Sedwell‘s in Savile Row it was clear to me from the outset that his was not the only story.  That Prof. Andrew Ramroop, O.B.E.,  came with two suits from Trinidad, with his mind strongly set to become a Savile Row tailor and achieving this against racist prejudice, is a remarkable tale of human endurance, ambition and effort.  Ramroop follows a remarkable line of Trinidadians – but a relatively small island in the Caribbean – in relation to the UK, be it Claudia Jones, Eric Williams, or Lord Learie Constantine, and their own respective achievements.

That now he should have an apprentice who is an orthodox Chabad rabbi is certainly no mistake.  In fact, Andrew Ramroop told me he recognised that Tiefenbrunn may have difficulties convincing some to take him on, with his beard and special religious needs.  Tiefenbrunn’s interest and dedication to be a world-class tailor and introduce some nuances of individuality in Haredi fashion is unusual and astonishing at the same time.  But Tiefenbrunn notes that he is not the first Jewish tailor nor that the Orthodox Jewish world lacks tailoring today.

When you hear that Ramroop serves clients like Samuel L Jackson, and once designed for the late Lady Diana, against initial adversity, one wonders to what lengths the Rabbi with the needle will bring it.

The article can be read in German here:  http://www.juedische-allgemeine.de/article/view/id/16447

You can use Googletranslate to translate it into any language you prefer.