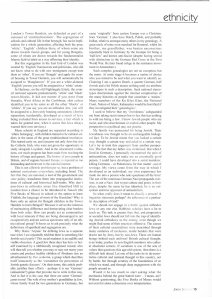 Hey Jude was an article published in Winter 1998 in the Jewish Socialist. It spoke about the strange rites of multiculturalism, as well as notions of Englishness and Britishness. Amongst others it stated that one of the things lacking in Britain were language classes in Urdu for non Bengoli English people in local populations that had a large percentage of Bangladeshi intake, and
takes issue with ethnic monitoring forms. Click the images to read the text (jpg format).